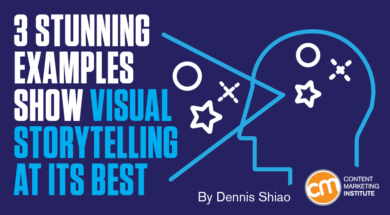 From caveman drawings to silent movies, visual storytelling has been used to educate, engage, and motivate audiences for centuries.

The digital age, though, has ushered in a new set of tools and technologies for visual storytelling. Eric Goodstadt, president of Manifest, and Sacha Reeb, chief creative officer at the content marketing agency, tackled the topic in their Content Marketing World presentation, Five Very Different Examples of Stellar Visual Storytelling and Why They Are a Step Above the Marketplace.

What is visual storytelling?

Eric and Sacha offer this definition:

“Visual storytelling involves the use of graphics, images, pictures, and videos to engage with viewers in an effort to drive emotions, engage intercommunication, and motivate an audience to action.”

Their definition covers both the tools used (graphics, images, pictures, videos) and the outcome desired: to drive emotions and engage intercommunication to motivate an audience action.

On #visual stories: What is it you want the audience to do? Start there and work your way back to the beginning, says Eric Goodstadt of @manifest_agency via @CMIContent. Click To Tweet

Visual storytelling should include five core elements, according to Eric and Sacha:

Why Is Simone Biles the World’s Best Gymnast? (The New York Times)

The New York Times produced a set of video profiles of athletes representing Team USA in the 2016 Summer Olympics, including Why Is Simone Biles the World’s Best Gymnast?

Elite athletes can make their achievements look easy, which makes it hard for spectators to understand and appreciate their skill and effort. Through this almost three-minute video, viewers get an in-depth explanation of Simone’s brilliant gymnastic moves.

With the camera positioned directly behind her launching point, viewers see Simone in a slo-mo run toward the vault springboard. They hear a fast-paced music track of a sequence of high notes quickly played on a piano. On the left side of the screen, words float forward before they fade:

is the most dominant gymnast

As Simone gets closer to the vault, the view switches to full speed and she launches. 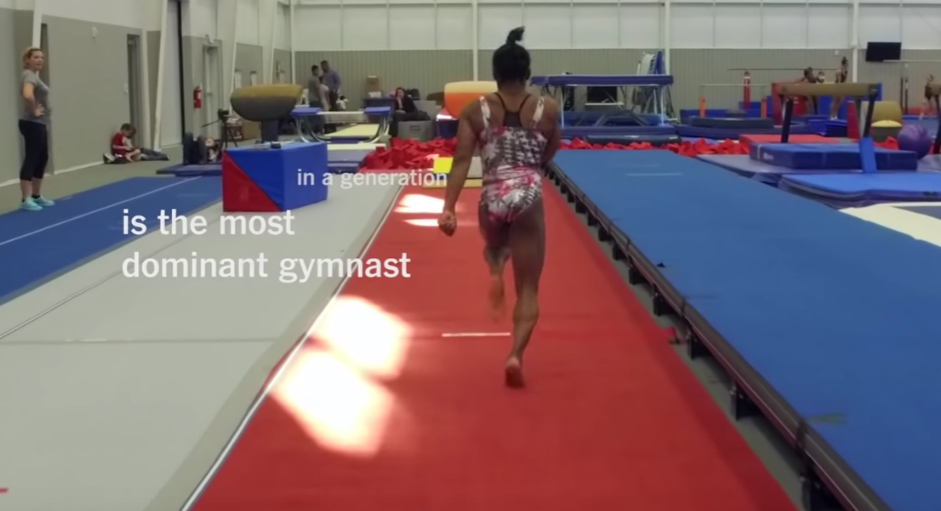 It’s been eight seconds. The viewer is motivated (tension) and hooked (entertainment) to continue the story.

As her feet land on the mat, the on-screen scenes quickly move to a series of Simone’s landings and performances on multiple pieces of apparatus in different venues.

The story evolves as the viewer sees Simone’s early talent in clips of her childhood competitions and later world championships. It ends that part of the story with the move only Simone can do – The Biles. How does the viewer know what they’re seeing? An overlay of brief text explains it (education).

From there, the tension, entertainment, and education don’t dissipate. A sequence of scenes shows The Biles in real time while a text overlay explains what it is – “double layout with a half-twist and a blind landing.” 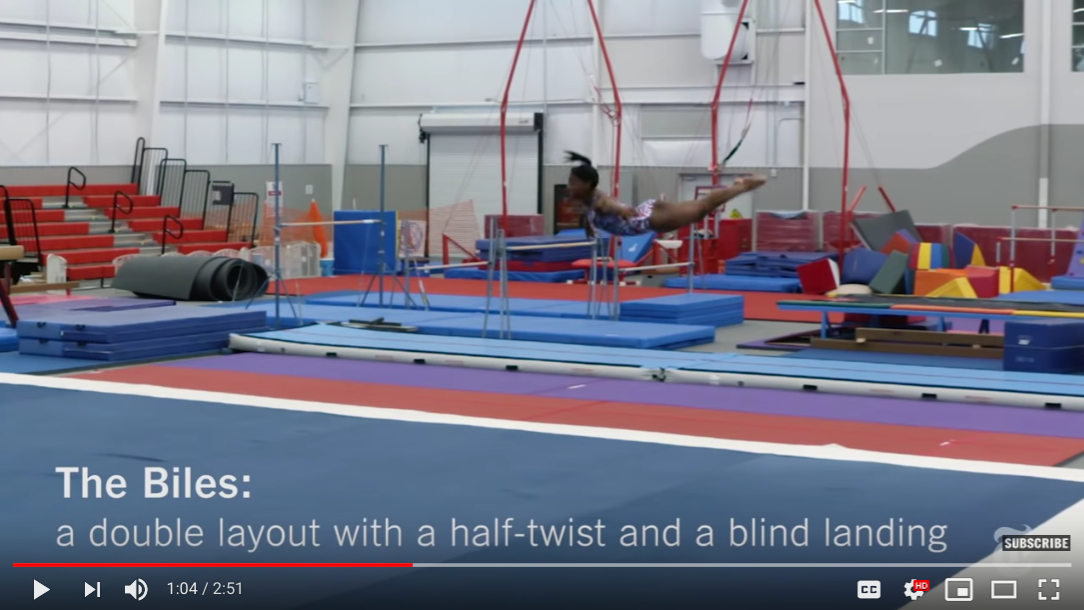 With a wide grin, Simone says on camera, “I’ve seen some of my guy friends try it, but they never land it, so they get really upset.” (Her quote tackles both the tension and entertainment value.)

The story continues for another couple of minutes. Viewers learn that Simone can jump twice her height. Through an on-camera interview, her coach explains that Simone can do more in a single pass on the floor exercise because she doesn’t require as much running time to launch. The visuals move from videos to a detailed graphic demonstration. 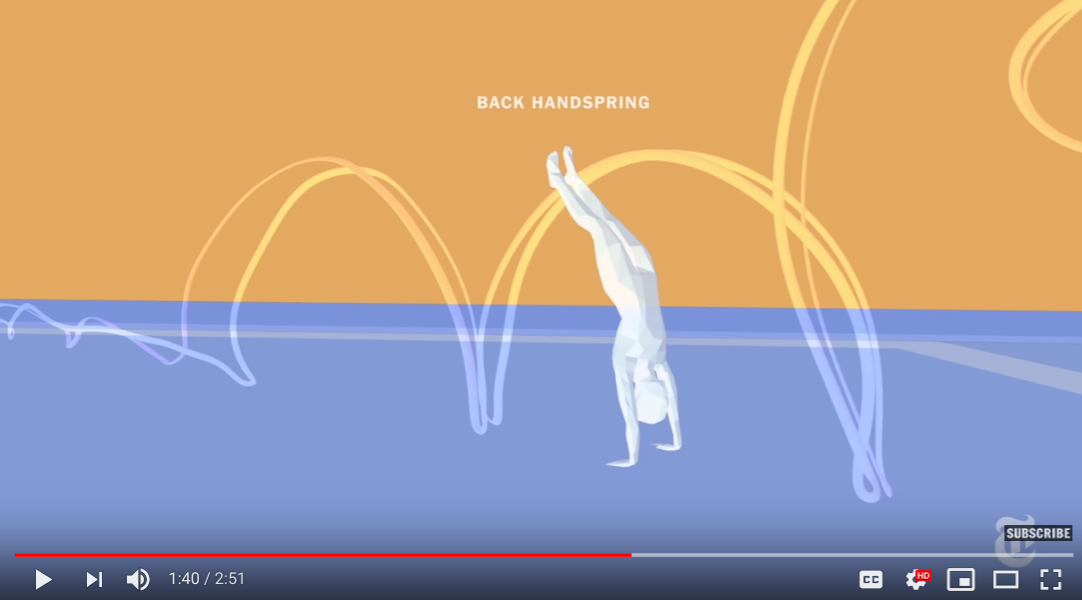 In the later segment of the video, the story moves to Simone’s unique talents on the beam – she can do maneuvers on that equipment that others can only do on the floor and she does a landing that no one in the world can do (more tension, entertainment, and education).

What gives this piece such impact?

“During that story, we understood two or three facts, but they’re highlighted in a certain way that it makes me understand how amazing it is,” Sacha said. “I was not inundated with too much information, just a few facts that are brilliantly translated through storytelling, brilliantly translated through multiple mediums using live motion, infographics, typography, and short interview segments.”

Don’t inundate the audience with facts in visual stories, advises @ReebSacha. Reinforce the few you choose with live motion, infographics, and typography. Via @CMIContent Click To Tweet

The call to action? No call to action happened directly in the video. In the text below the YouTube-hosted video, The New York Times asks viewers to subscribe to its channel and to visit The Fine Line: Simone Biles Gymnastics, an interactive version of Simone’s story.

Population Healthier, a microsite on The Atlantic sponsored by Athenahealth, tells the story of “[h]ow one radically diverse, mid-sized American city has managed to make its communities healthier while winning the fight against skyrocketing costs.”

Visit this site and you immediately notice the micro-interactions. “As I scroll, the site or the story reacts to my movements. That means that I am in control,” Sacha says. “I can go back and forth, scroll up and scroll down. It reacts to me.”

The micro-interactions might seem like cool features, but they’re more than that – they pull visitors in by putting them in control.

The subject matter is thought-provoking. “This is not superficial. This goes into depth. There is an understanding of the complexities of the health-care system, as well as complexities inherent to this community. It’s good journalism,” says Sacha.

To complement the written word, the site uses visual elements, such as illustrations and 3D renderings. It also presents data visually, helping the audience better understand what the information communicates.

In one section of the site, a color-dotted map reinforces the text description of the cultural transformation happening in Lowell, Massachusetts. Below the text is a chart about non-white race distribution, further simplifying the point visually:

“When you see all the colors intermixed,” Eric says, “it drives home a journalistic story of a very diverse area that can still have superior health care because they’re treating the patient versus the disease. That is an example of how journalism and visual design work hand in glove.”

The sponsored-content format offers advantages in visual storytelling. “It’s not interrupted by any ads. There’s no right-hand rail where ads usually appear. It has no distractions. It’s focused. And then it’s interactive, so you’re completely engaged as an audience,” Sacha says.

The Areas of Focus microsite is a single-page, interactive photo gallery. It tells the story of photographer Jim McNeill, who was given a Nikon Z 7 camera and asked to spend time following a street musician and a speakeasy club in New York City.

Paid for by Nikon to promote its new professional camera as an alternative to the commonly used DSLR cameras, the microsite was designed and created by The Atlantic’s marketing team.

The story begins in text to set the stage: “McNally traded his DSLR for Nikon’s newest portable and lightweight mirrorless camera: the Z 7, perfectly suited to the hunt-and-seek photography that gave him his start. For one week, we tagged along as Joe explored locations across the city, testing out Nikon’s latest features in his signature style.”

The microsite is targeted at professional photographers. The Atlantic and Nikon knew this audience wants to know how their peers take their shots – the details of setups, settings, etc. And that’s the story told visually and through text when viewers scroll the site.

This insider’s look is complemented by elegant micro-interactions.

“You’re going to see there are subtle mouse-overs that tell you that you can see more details. You see the shot. You have access to the settings. You can also just get closer to see the quality of the photo. These are very subtle interactions that are clearly magnifying some information,” Sacha says.

Here’s one image from the story: 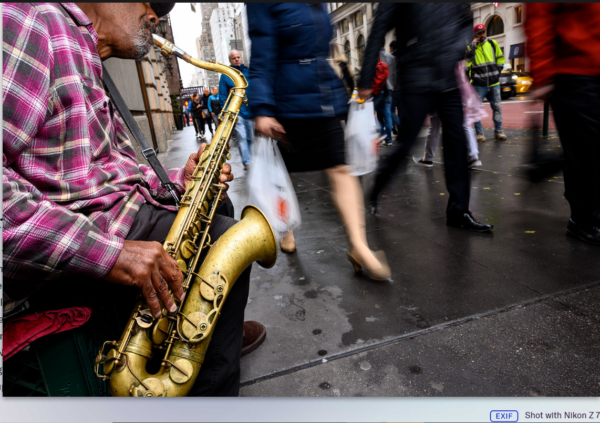 When visitors hover their mouse over a label (EXIF Shot with Nikon Z 7) directly beneath the photo, the shot’s camera settings appear: 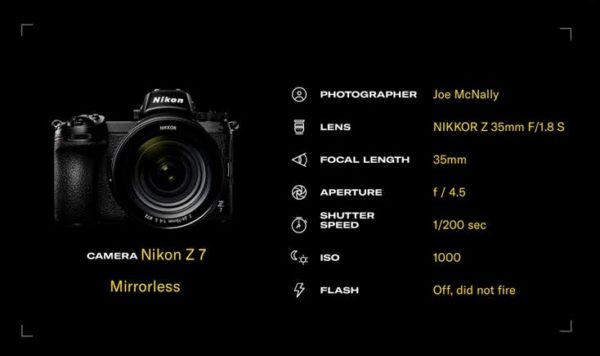 The story picks up later in the week when the photographer visits the Manhattan Cricket Club to test the camera’s portability as well as its high ISO (light-sensing) capacity: 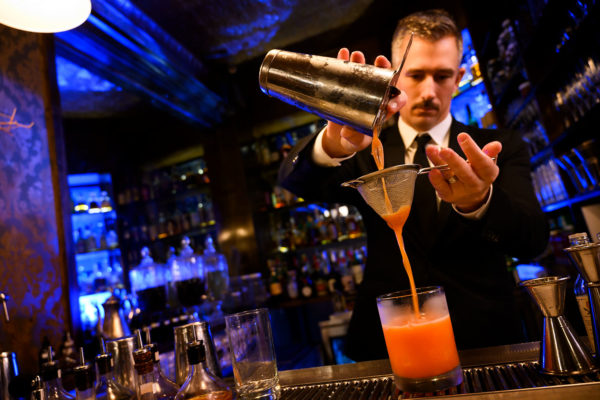 Like any good storytelling, the narrative takes viewers back to the main character – the street musician – as the photographer visits him at home the morning after the Cricket Club excursion:

As the story of both the musician and the week of photography using the Nikon camera concludes, a fresh take on the photographer’s bio appears.

The site takes you on an engaging and visually captivating journey through New York City with the Nikon camera as the co-star.

The @NikonUSA camera was the co-star in a story told by a New York photographer, says @dshiao via @CMIContent. Click To Tweet

What visual story do you have to tell?

The three examples featured in this post came from leading media companies and big brands. You might be thinking, “I just don’t have the budget that The New York Times or Nikon has.”

But you don’t need a big budget to apply the concepts Eric and Sacha outlined to create great visual stories – create tension, entertain, educate, facilitate micro-interactions, and issue a clear call to action.

Almost everybody is publishing text-based blog posts and articles these days. Far fewer are doing visual storytelling. Take advantage of the opportunity.

Here’s an excerpt from Eric and Sacha’s talk:

Learn more about visual storytelling and many other related topics at Content Marketing World this October in Cleveland, Ohio. Register now for the best rates.