How to Raise a Reader: Mary Shelley’s Father on Parenting and How an Early Love of Books Paves the Way for Lifelong Happiness 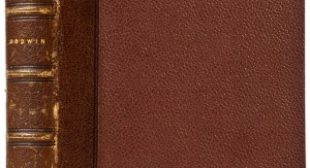 “The impression we derive from a book, depends much less upon its real contents, than upon the temper of mind and preparation with which we read it.”

In the final years of the eighteenth century, the radical political philosopher and novelist William Godwin (March 3, 1756–April 7, 1836) entered into a pioneering marriage of equals with another radical political philosopher and novelist: Mary Wollstonecraft, founding mother of what later ages termed feminism. While Wollstonecraft was pregnant with their daughter — future Frankenstein author Mary Shelley, a Romantic radical in her own unexampled right — Godwin began channeling their nightly conversations about how to raise happy, intelligent, and morally elevated children in a series of essays later published as The Enquirer: Reflections on Education, Manners, and Literature (public library) — a title that gives it a deceptive air of politeness and dated propriety; it is in fact a radical work, scandalous to Georgian and Victorian sensibilities, centuries ahead of its time, anticipating the conclusions of modern social science and psychology, neither of which existed as a formal field of study in Godwin’s time, about some of the fundamentals of optimal parenting.

The true object of education, like that of every other moral process, is the generation of happiness. Happiness to the individual in the first place. If individuals were universally happy, the species would be happy.

At the heart of this happiness-generating education, Godwin places the importance of instilling in children an early love of literature, which would “inspire habits of industry and observation” that by young adulthood would ferment into “a mind well regulated, active, and prepared to learn.” Although his language is bound in the era’s biases — an era far predating Ursula K. Le Guin’s brilliant unsexing of man as the universal pronoun — Godwin’s ideas soar with timelessness, on the wings of poetically articulated truth:

There is perhaps nothing that has a greater tendency to decide favourably or unfavourably respecting a man’s future intellect, than the question whether or not he be impressed with an early taste for reading… He that loves reading, has every thing within his reach. He has but to desire; and he may possess himself of every species of wisdom to judge, and power to perform.

He considers how books not only enrich us with the wisdom of the ideas contained in them, but also sprinkle upon us some the splendor of mind that originated them, producing in us a quickening of both sense and sensibility:

Books gratify and excite our curiosity in innumerable ways. They force us to reflect. They hurry us from point to point. They present direct ideas of various kinds, and they suggest indirect ones. In a well-written book we are presented with the maturest reflections, or the happiest flights, of a mind of uncommon excellence. It is impossible that we can be much accustomed to such companions, without attaining some resemblance of them. When I read Thomson, I become Thomson; when I read Milton, I become Milton. I find myself a sort of intellectual camelion, assuming the colour of the substances on which I rest. He that revels in a well-chosen library, has innumerable dishes, and all of admirable flavour. His taste is rendered so acute, as easily to distinguish the nicest shades of difference. His mind becomes ductile, susceptible to every impression, and gaining new refinement from them all. His varieties of thinking baffle calculation, and his powers, whether of reason or fancy, become eminently vigorous.

Having thus outlined the invaluable lifelong benefits of reading, Godwin endeavors to lay out the elementals of raising a reader. Building on the most central, most radical ethos of his Enquirer essays — the countercultural idea that children ought to be treated not as subjects to authoritarian rule but as equal citizens of life, endowed with intellect and sensitivity, and must be granted the dignity of truth rather than being bamboozled with hypocrisies and shielded from the world’s disquieting realities — he writes:

The child should early begin in some degree to live in the world, that is, with his species; so should he do as to the books he is to read. It is not good, that he should be shut up for ever in imaginary scenes, and that, familiar with the apothegms of philosophers, and the maxims of scientifical and elevated morality, he should be wholly ignorant of the perverseness of the human heart, and the springs that regulate the conduct of mankind. Trust him in a certain degree with himself. Suffer him in some instances to select his own course of reading… Suffer him to wander in the wilds of literature.

Two centuries later, the Nobel-winning Polish poet Wisława Szymborska would echo the sentiment in her wonderful meditation on fairy tales and the importance of being scared.

In consonance with what every wholehearted reader knows — that we bring ourselves to the books we read and what we take out of them depends on what we bring — Godwin adds:

The impression we derive from a book, depends much less upon its real contents, than upon the temper of mind and preparation with which we read it.

Complement with A Velocity of Being: Letters to a Young Reader — an illustrated collection of testaments to Godwin’s impassioned insistence on the life-shaping value of reading by 121 of the most visionary humans of our own time — then revisit Rebecca Solnit, modern-day cultural descendant of Mary Wollstonecraft, on how books solace, empower, and transform us.