On Grief, Seasoning Skillets, & the Comfort of a BLT

Summer 2019. I have a new cast-iron skillet, and it needs seasoning. “Bacon,” my friends said. “Cook lots and lots of bacon.”

At first, I resisted. I’m not a bacon kind of girl, I reasoned. We didn’t cook it at all when I was growing up—even in a thoroughly assimilated Jewish household, pork was a bit foreign. Plus, bacon was too fatty for my parents’ liking, even before they stopped eating meat altogether. I ate a whole strip of bacon once as a child, and later that day had a stomachache; I fancied the two connected, and for years I insisted that bacon wasn’t for me. Even now, in my 30s, my tastes largely mirror what I grew up eating: I prefer olive oil to butter, and low-fat milk to whole.

I learned how to eat from my parents, how to cook in their old skillets with mottled deposits of seasoning in the corners. My dad taught me how to use a cleaver for mincing herbs, how to empty out the crisper drawer and use the contents to improvise a pasta sauce, how to taste and smell my way to the right mix of seasonings. I learned to cook for him, to his tastes—to pause in the simmering or sautéing and bring him a spoonful of whatever I was cooking, waiting for his eyes to light up and his mouth to curl in a smile.

But now I have a new skillet. I used to have a different one, but it’s gone now. I bought that one 8 years prior, shortly after my dad was first diagnosed with cancer. 8 years of cooking in that pan, building up an ever-smoother black patina, until food finally began to glide rather than stick on the surface. I intended that pan to be with me for life. But I must have spilled something acidic on it without noticing, and then my dad’s airway closed up and he was rushed to the hospital, and I tucked all my cookware into the cupboard and left it for months, until whatever-it-was ate through the seasoning and down to the metal below. Even stripping off all that hard-won seasoning with oven cleaner only made the scar worse.

So the old pan is gone, and now I have a new one. I don’t want to be here, mourning a skillet, mourning my father. Laying down new layers of seasoning, until things can once again glide rather than stick.

But in grief, there are lots of surprises. About a month after my dad died, I had a bacon, lettuce, and tomato sandwich for the first time in my life, and surprised myself by falling head over heels. So here I am, teaching myself to cook bacon, and making a BLT for lunch for the third time in as many days.

It started at a sandwich shop, a last-minute meal grab before a busy day. I scanned the menu, waiting for my muffled appetite to rumble to life. My eyes darted to the BLT. Locally made bacon, high season heirloom tomatoes, lettuce, mayonnaise, toasted bread. No mystery ingredients; nothing to negotiate or guess at. No chances for my brain to argue itself out of a nourishing meal.

I’d long been indifferent to bacon—I told myself—and averse to raw tomatoes. But fresh grief seemed to have reprogrammed my taste buds. I’d suddenly begun craving French fries every time I took a sip of wine. When my family went to our favorite diner for brunch, I’d started ordering bacon with my eggs. I could handle a BLT.

5 Tips For A Better BLT

Hours later, in a few stolen minutes between itinerary stops, I pulled the car into a parking spot and unwrapped my sandwich. I leaned the paper wrapper against the steering wheel, making a cradle for the tomato juices. I took a bite, and an involuntary yelp of surprise escaped my lips. Instead of the sour mealiness of a beefsteak tomato, there was the soft jelly of a yellow-brown heirloom. The bacon was smoky and salty, still a little crisp even after hours in the car. The lettuce crackled between my teeth; the mayonnaise coated my tongue; the bread yielded under my teeth without collapsing. It was not at all what I expected, this mix of fragrant and smoky and fatty and creamy and crunchy and whole-grain-nutty. I couldn’t believe I liked it.

So here I am, two months after my father’s death, cooking bacon and making sandwiches. I put the skillet on the largest burner, the one whose flames reach closest to the pan’s edge. I pull three strips of bacon out of their package, the fridge-cold fat softening under the warmth of my fingers. I lay the strips in the pan, one at a time, then quickly rinse my fingertips in the sink. The feeling of half-melted pork fat on my skin is new; it makes me feel disloyal.

I turn the knob under the pan to medium-low and wander into the living room. After two days of practice, I’ve learned that nothing will happen for a while, so it’s safe to leave as long as I stay within view of the stove. It’s a comfort, that, to be able to let down my guard after months of waiting for the next phone call, the news that Dad has been hospitalized again, that he’s bleeding or feverish or struggling for breath. To sit and let my mind be vacant, after so much time sitting restlessly at my parents’ kitchen table, waiting for him to need our care.

I can hear the bacon before I can smell it. A puckery spitting sound, slow at first, then getting louder and faster. By the time I’m back at the stove, the bacon is rippling in a growing pool of rendered fat, and the oven dial is freckled with grease. I’m amazed, still, at how the streaks of fat turn from pearly white to waxy yellow, how the meat darkens from flesh-pink to wood-brown. I can smell the smoke, dark and acrid, with the husky funk of pig underneath.

I’m still learning when to take the bacon out of the pan, how to tell the turning point from flabby to crisp to overdone. Yesterday I left it too long, and it was brittle and bark-like; today I pull it out too early, so the thickest part of the fat is still chewy. It doesn’t matter. I’m hungry, and grief has sapped my attention to detail anyway.

I pour the rendered fat into a custard cup—amazing how just three strips of bacon can fill a whole skillet. A year ago, I would have felt a sour twinge in my stomach; now, I cover the cup and put it in the fridge to roast vegetables later. A thin sheen of fat remains in the pan, and I put the slices of bread in to toast. Meanwhile, I slice a tomato and pull a couple of leaves of green leaf lettuce off the head. This is the easy part: I know how to make a sandwich. A swipe of mayonnaise, a lettuce leaf, the tomatoes shingled into a pile and a sprinkle of salt on them, bacon snapped into pieces and cross-hatched on top, another lobe of lettuce, and mayo on the other bread slice.

It’s not as good as that first shop-bought sandwich, of course. The bread is too airy, too lacey, and it’s quickly sodden with tomato juice and mayo. I didn’t cook the bacon crisp enough. The tomato is overripe and mushy, threatening to slide out of the sandwich with every bite. It’s not perfect, but it’s food. Another meal cooked without my father. Another layer of seasoning laid down.

By the time I’m done eating, there’s a pool of translucent red juices on my plate. I pick it up and tilt the runoff into my mouth. It tastes like smoke and summer.

Do you have a special memory attached to your old (or new) cast iron skillet? Let us know in the comments. 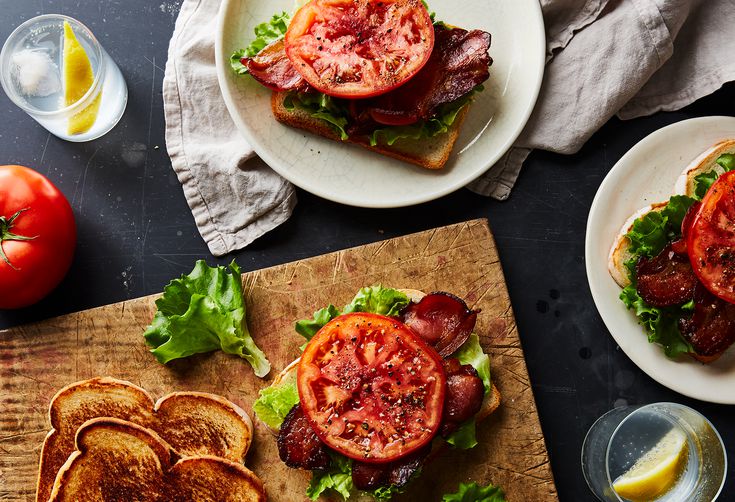