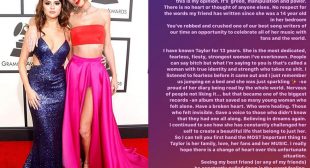 Selena Gomez is prepared for battle. After the huge dispute with Scott Borchetta, Selena Gomez defended BFF Taylor Swift against Big Machine dispute, and we don’t blame her. In case you missed it, the disagreement is about Scott Borchetta and Scooter Braun denying Taylor’s performance of certain hits during the 2019 American Music Awards where Swift is being recognized as the Artist of the Decade.

On Friday, Gomez made an Instagram post in defense of Swift’s character and hard work and according to the statement, Gomez is prepared for retaliation.

Gomez wrote, “My heart is so heavy right now,” Gomez wrote in the post. “It makes me sick and extremely angry. (I don’t mind if there may be retaliation) this is my opinion. It’s greed, manipulation and power. There is no heart or thought of anyone else’s. No respect for the words my friend has written since she was a 14 year old in her bedroom. You’ve robbed and crushed one of our best song writers of our time an opportunity to celebrate all of her music with fans and the world.”

Gomez described her friend as “a woman with true identity and strength who takes no shit.”

She recalled their 13-year friendship and spoke out about the first time she heard Fearless—before it was released—and being so proud of Taylor’s vulnerability that “became one of the biggest records—an album that saved so many young woman who felt alone. Have a broken heart. Who were healing. Those who felt invisible. Gave a voice to those who didn’t know that they had one all along. Believing in dreams again.”

Gomez ended the post with the hope that there will be “a change of heart over this unfortunate situation.” She is clearly saddened by seeing her friend get dragged and she ends with recounting Swift’s integrity.

Swift also went to social media to express her feelings and claimed that the dispute is also about Borchetta and Braun denying use of certain hits for an upcoming Netflix documentary project. In the open letter, Swift wrote, “Scott Borchetta told my team that they’ll allow me to use my music only if I do these things: If I agree to not re-record copycat versions of my songs next year (which is something I’m both legally allowed to do and looking forward to) and also told my team that I need to stop talking about him and Scooter Braun.”

“I feel very strongly that sharing what is happening to me could change the awareness level for other artists and potentially help them avoid a similar fate,” Swift said. “The message being sent to me is very clear. Basically, be a good little girl and shut up. Or you’ll be punished. This is WRONG. Neither of these men had a hand in the writing of those songs. They did nothing to create the relationship I have with my fans. So, this is where I’m asking for your help.”

After attempts on both ends, it seems, neither party has been able to resolve the issue and now Taylor has involved millions of fans by saying, “please let Scott Borchetta and Scooter Braun know how you feel about this.” Joining Selena Gomez in defending Taylor Swift is her huge fanbase, along with other celeb supporters like Brendon Urie, Todrick Hall, Camila Cabello, Gigi Hadid, and Halsey.