The Shortest Day: A Lyrical Illustrated Invitation to Presence with the Passage of Time, Our Ancient Relationship with the Sun, and the Cycles of Life 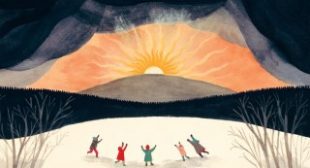 A lovely homage to a universal human impulse radiating across time and space and cultures and civilizations.

“How we spend our days is, of course, how we spend our lives,” Annie Dillard wrote in her timely exhortation for presence over productivity. It may be an elemental feature of our condition that the more scarce something is, the more precious it becomes. Just as the shortness of life calls, in that Seneca way, for filling each year with breadths of experience, so the shortness of the day calls for the fulness of each hour, each moment. No day concentrates and consecrates its elementary particles of time more powerfully than the shortest day of the year. With our awareness pointed to its brevity by ancient rites and modern calendars alike, as we “rage, rage against the dying of the light,” something rapturous happens — a kind of portal into heightened presence opens up as every minute ticks with a supra-consciousness of its passage, pulsates with an extra fulness of being, while at the same time attuning us to the cyclical seasonality of time, reminding us of the cycles of life and death.

That is what writer Susan Cooper and artist Carson Ellis celebrate in The Shortest Day (public library) — an illustrated resurrection of Cooper’s 1974 poem by the same title, originally composed for John Langstaff’s beloved Christmas Revel shows, which fuse medieval and modern music in grassroots theatrical productions across local communities.

Cooper’s buoyant verses and Ellis’s soulful, mirthful illustrations bring to life, across time and space and cultures and civilizations, the ardor with which our ancestors have welcomed the winter solstice since long before the astronomer Johannes Kepler coined the word orbit in an era when few dared believe that the Earth spins on its axis while revolving around the Sun. (It is a function of the tilt of Earth’s axis and the elliptical shape of its orbit — another radical contribution of Kepler’s, who debunked the millennia-old dogma of perfect circular motion — that when our planet reaches the point of the oval farthest from the Sun, and when its axial tilt leans one pole as far away as it would go from our star, we are granted the shortest possible day and the longest possible night of the year.)

So the shortest day came, and the year died,
And everywhere down the centuries of the snow-white world
Came people singing, dancing,
To drive the dark away.

They lighted candles in the winter trees;
They hung their homes with evergreen;
They burned beseeching fires all night long
To keep the year alive.

In an afterword reflecting on the universal human impulse to celebrate light — its departure and its return — Cooper writes:

If you live on a planet that circles a sun, your time is governed by the patters of light and darkness, summer and winter, warmth and cold. And, of course, life and death. Once our forebears learned to farm, they planted and harvested at the equinoxes, but it was the solstices that caught their attention. The extremes. They watched their days shrink from the bright abundance of high summer to the bleak, dark cold of winter, and they invented rituals to make sure the light would come back again: to bring the new day, the new year, the rebirth of life.

The rebirth rituals have become traditions we still celebrate, whether or not we remember where they came from. Some of them are so old that only their monuments remain. On the morning of the winter solstice at the great earthwork Newgrange, in County Meath, Ireland, the day’s first beam of sunlight shines in through a passage that Neolithic people built there five thousand years ago to catch it, and for seventeen minutes, a dark room deep within is filled with the sunshine of the shortest day.

Complement The Shortest Day with the great nature writer Henry Beston on solstice, seasonality, and the human spirit and poet Jane Hirshfield’s lovely ode to the leap day, then revisit Ellis’s lyrical illustrated meditations on the cycle of life and the many meanings of home.