In 2022, Lunar New Year will begin on February 1. For My Shanghai author Betty Liu, it’s a joyful celebration filled with family gatherings and edible treats. Most of these foods enjoyed during Lunar New Year in China, from egg dumplings to tatsoi to sticky rice cakes, are eaten to symbolize various well-wishes for the coming year. In this excerpt, Liu shares some of those Lunar New Year foods and their meanings.

As a child, Lunar New Year meant family gatherings, the hustle and bustle of preparations for
a delicious feast, and 红包 hong bao, “red envelopes filled with monetary gifts.” I didn’t think about it much beyond that, but as I grew older, having spent some of these holidays away from family, I began to appreciate how much this holiday was rooted in togetherness.

The lunar calendar is based on the movement of the moon, a method of timekeeping used, in part, because of China’s agrarian society. The start of a new cycle, the Lunar New Year is perhaps one of the most anticipated festivals in China. Preparation starts days before the new year and festivities extend halfway into the first month. The migration is phenomenal—more than three billion people make their way home to celebrate with their families.

The preparations for this holiday are some of my favorite memories from childhood: helping my mom with small tasks like washing vegetables, wrapping dumplings, and setting the table. The anticipation was an energy in and of itself: giddy and utterly exciting.

On New Year’s Eve, guests are welcomed with cups of tea and fresh fruit. Places are set for those who cannot return home. Specific foods are served for their symbolism—anything to maximize prosperity. Fish, whose Chinese character, 鱼 yu, is a homophone for surplus, 余 yu, is served whole for fortune. Golden egg dumplings because they resemble gold ingots of a time past. Tatsoi, 塌棵菜 ta ke cai or ta ku cai in Chinese, in Shanghainese sounds phonetically similar to 脱苦 tuo ku, which means “warding off any bitterness for the new year.” 年糕 nian gao, “sticky rice cake,” is served because it contains the character for “year,” and the second character, gao, is a homophone for “high.” Together, “year high” symbolizes upward mobility in the coming year.

灶君 Zao Jun, the “stove god,” oversees all household activities. According to tradition, he checks in on the twentieth day of the twelfth lunar month and assesses the household. For this reason, everything is left in place until then. When he departs on the twenty-third or twenty-fourth (depending on the region) to report to 玉皇 Yu Huang, the “Jade Emperor,” families begin the pre–New Year ritual of cleansing the home, kicking up dust and shifting furniture. The purpose of cleaning is twofold: to sweep away any evil spirits lurking in forgotten corners and residual bad luck and to have a presentable, pristine house for the upcoming feast. The new year is ushered in with a fresh environment—a fresh start to a new cycle.

At the Heart of This Lunar New Year, a Different Kind of Magic

The coveted hong bao is not just a cute tradition to make kids happy, but a way to connect the older generation with the younger. Visiting the elderly is a sign of respect, and the red envelopes are a reward to the children, a reminder and encouragement to continue to respect their elders.

In the days after the New Year, the festivities continue. On the fifth day, the fortune god comes to town, and sweeping is avoided at this time, for fear that you could sweep out good luck. The fifteenth day of the new year is called 元宵 Yuan Xiao, “Lantern Festival.” Yuan Xiao also refers to tang yuan, “sticky rice balls,” which are eaten as symbols of togetherness and unity. During this time, intricate lanterns are lit and sent off into the night sky, to help the gods see, followed by a last celebratory meal to end the New Year festivities.

At this point, half of the new month has passed in celebration. In the agricultural cycle, this is when the first rains of the new year will happen, and people ready themselves to go back to work to prepare the fields. Thus, another cycle begins.

Essay excerpted from the book My Shanghai by Betty Liu. © 2021 by Betty Liu. Published by Harper Design, an imprint of HarperCollins Publishers. Reprinted by permission.
This post contains products independently chosen (and loved) by our editors and writers. As an Amazon Associate and Skimlinks affiliate, Food52 earns an affiliate commission on qualifying purchases of the products we link to. 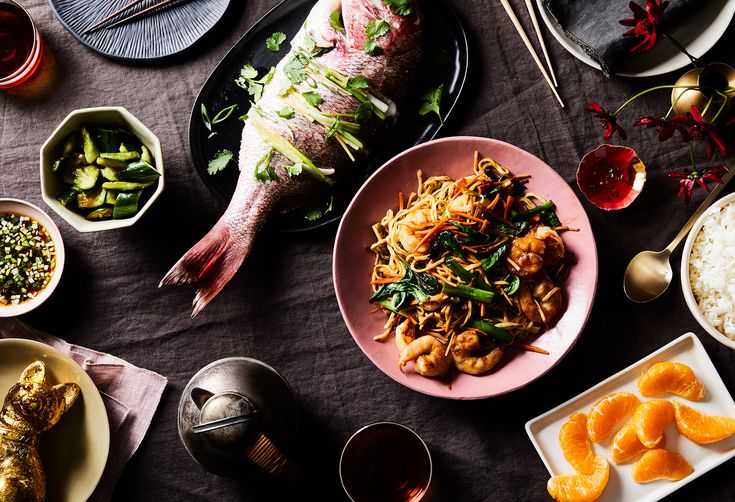