Content Marketer of the Year Shares the REI Story 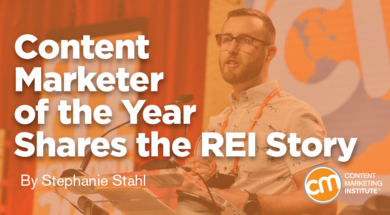 Leadership. It’s a lively mix of team building, innovation, excellence, humility, and results. These are just a few of the characteristics we look for when selecting the finalists for CMI’s Content Marketer of the Year award. As we begin to unveil our 2018 finalists in the coming weeks, we want to give you a closer look at last year’s honoree.

Paolo Mottola, managing editor at REI Co-op and the 2017 Content Marketer of the Year, has demonstrated again and again how content can drive more than interest and engagement – it can drive action.

If you #OptOutside, you probably already believe REI’s brand promise that a “life outdoors is a life well lived.” But even occasional hikers and those whose adventures are limited to chaperoning Girl Scout campouts find REI’s content inviting, approachable, educational, creative, and bold.

That’s the result of a deliberate strategy designed “to get more people understanding that the outdoors is accessible for all,” Paolo says.

And it explains why you won’t see models or stock photos dressing up REI’s content. “We express that through our members and we shine a light on their real stories,” Paolo says. This kind of authenticity is palpable to experienced and amateur recreation lovers. Not everyone’s ready for content on how to run 100 miles and not everyone needs a tutorial on how to build a fire, but Paolo and team make sure they offer information for both groups and everyone in between.

REI’s content mix includes everything from blog posts to video how-to’s and from short films to, more recently, podcasts. The brand launched two shows this year, Wild Ideas Worth Living and Take It From Me.

“There’s a ‘share of ear’ we want to be a part of, and the intimacy of long-form audio creates a lot of different opportunities, more than we have with video or the written word,” Paolo says.

Take It From Me also uses an interview format, but with a creative twist. Paolo describes it as a “relay race,” where the interviewee in one episode becomes the interviewer in the following episode.

While much of REI’s content resonates with a wide audience of adventurers, some of its boldest initiatives have been designed to expose – and celebrate – specific audiences taking part in outdoor experiences.

You need look no further than social media to see both newbies and pros proudly tagging their content with #OptOutside. The hashtag started on Black Friday 2015 when REI invited the nation to reconnect with their families and friends instead of shopping for holiday deals. REI closed its doors and paid employees not to work but to enjoy the day outside.

It wasn’t a one-time publicity stunt. The company has shut its doors every Black Friday since. In 2017, an estimated 8 million people took part, according the company’s 2017 Stewardship Report, which details REI’s sustainability efforts, political activism, gender equality strategies, and nonprofit support.

In early 2017, REI’s film about Brothers of Climbing documented the organization’s mission to increase diversity in outdoor adventures. As BOC co-founder Mikhail Martin says in an interview in REI’s Co-Op Journal, “We want to bring the community together. We want to see people of color experience a higher level of comfort in the outdoors. We want to hear more children saying they want to be rock climbers instead of the typical basketball or football player.”

HANDPICKED RELATED CONTENT: How REI Is Unlocking the Power of Long-Form Video

More recently, REI tackled how women are represented outdoors, through an initiative called Force of Nature, which, as REI CEO Jerry Stritzke wrote in an April 2017 post, “claims the outdoors as a place to opt out of cultural pressures to conform – the ‘supposed-to’s’ and ‘shoulds’ that underpin outdated stereotypes – especially for women.”

The initiative grew out of a survey REI commissioned in early 2017. The results were predictable in one sense: 85% of women surveyed said they “believe the outdoors positively affects mental health, physical health, happiness, and overall well-being,” and 70% reported that being outdoors is liberating.

But it also revealed that most of the women who responded lacked a female outdoor role model – and most believed men’s outdoor interests are taken more seriously.

To “create real change right now,” as Jerry put it, the company pledged to put “women – of all ages, races, sizes, gender expressions – front and center in all we do.” REI also developed a $1 million grant to support nonprofit organizations that create outdoor opportunities for women.

Paolo’s team’s job was to mine for women’s stories – and women storytellers – to bring more balance to the content showing up in outdoor media. “It wasn’t a challenge to make that shift given all the amazing work women are doing in the outdoors,” he says.

The initiative resulted in films and blog articles shining a spotlight on women’s outdoor experiences, as well as a steady stream of social media content. For those who want more interactive experiences, REI launched 1,000 classes and events for women.

Although increased sales weren’t the main goal, the company’s been rewarded for its efforts: After the Force of Nature launch, its women’s business grew 20 percent year over year.

“Even before the research study, REI had an internal team working for a year to prepare and to evaluate the company’s gender equality practices. In 2015, the REI Foundation made a $1.5 million gift to the Outdoor Industries Women Coalition (today called Camber Outdoors) and the co-op led a CEO pledge to bring more women into the outdoor industry.

“At every step of the creative process we became more and more excited about what we were putting out into the world, and we saw people respond – from selfies with our catalog to seeing orange Force of Nature bandanas out on the trail to this day,” Paolo says. “We are really proud of the work.”

Though the Content Marketing Institute honored Paolo with its 2017 Content Marketer of the Year award, he’s quick to point out that his team does “kick-ass work” and deserves credit for the high-quality, creative content REI produces.

Most people on the REI content marketing team have journalism degrees, and many come with brand experience from working with companies such as Starbucks, Razorfish, and Uber.

“We look for people who have the skills and mindset of journalists because we have to deliver content at a standard set by publishers and in service of our members,” he says. “Our teams know how to identify a story and report on it with fact-checking and a multi-source approach at pace.”

At the same time, the team understands what it means to work for a retail brand. “We know – and want our readers to know – we’re serving a different kind of purpose than a traditional publisher. Sometimes we’re part of the story itself. What’s most important is that we’re transparent with readers in our role and the stories we cover.”

The feeling is mutual. “Paolo’s strongest asset is probably his attention to detail,” says Joe Crosby, content marketing manager at REI. “I don’t mean crossing t’s and dotting i’s, though it’s that, too. It’s his attention to macro trends in media, advertising, and technology. It’s his attention to what’s going on in other parts of our business, and how it’s all translated through a channel strategy. He’s constantly learning about what’s going on inside our walls and out, and I think that drives his sense of innovation – but never innovating for innovation’s sake. Innovating for the business and, most importantly, the customer.”

Adds Joe, “When people talk about REI content marketing, they often talk about the exposure of our films or some of our contributions to important brand moments like Force of Nature or #OptOutside. But what they don’t know is that Paolo started this team from scratch just a few years ago, with basically a rudimentary blog and no films.”

While Paolo sees a lot of content marketing peers working hard to enhance their skills, he’d like to encourage more to progress in their careers. “Content is a leading channel for marketing. Do emerging content leaders want to accelerate their program’s authority? Affect the way to engage with customers? The opportunity is now,” he says. “It’s time to rise to the challenge.”

Who is rising to the challenge? Find out in the coming weeks as we profile the 2018 Content Marketer of the Year finalists.

Want to make sure you’re one of the first to read about the 2018 Content Marketer of the Year finalists? Sign up for CMI’s daily newsletter.