Everything You Need to Know About Taro

Every week we get Down & Dirty, in which we break down our favorite unique seasonal fruits, vegetables, and more.

Today: Get to know a tropical tuber you might have been missing out on. 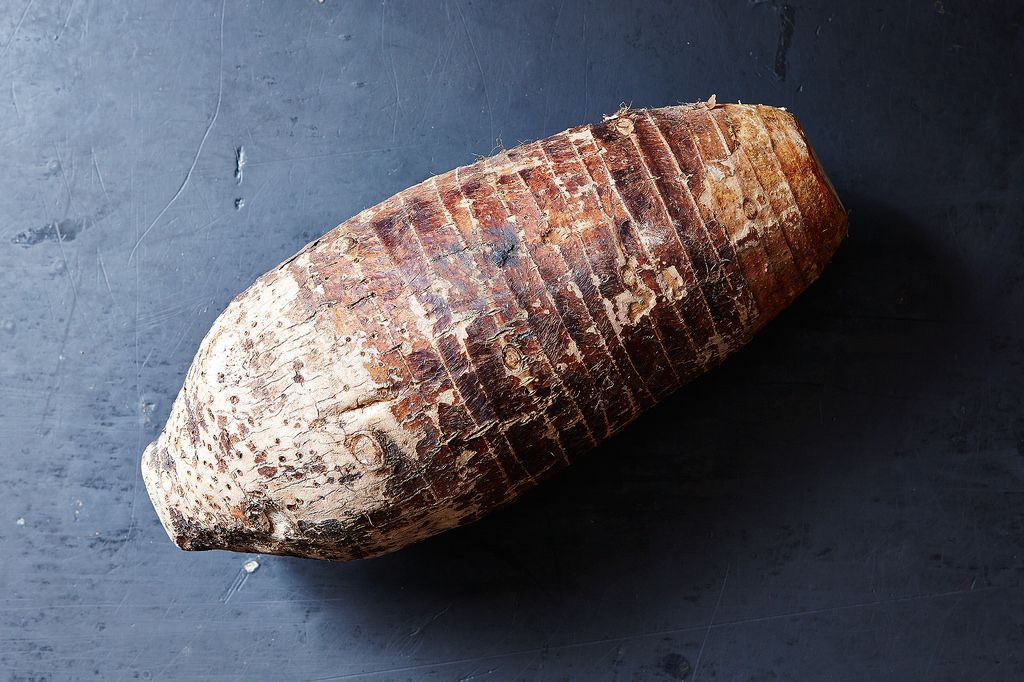 If you thought Jerusalem artichokes were confusingly named, it turns out tropical tubers might be even more perplexing. Taro is a root vegetable, but it’s not one that typically shows up in the average American grocery store.

True taro is what we are talking about today, but even once we’ve established that, the nomenclature can still be bewildering. Taro goes by a number of different names (satoimo, elephant’s ear, cocoyam, etc.), which is not all that surprising considering that, like all things, taro has its own name in every different place that it’s grown and that taro is grown in more than 40 countries. It’s actually one of the world’s oldest cultivated plants, as Morgan elaborates: “References suggest that it has been domesticated for over five thousand years in tropical Southeast Asia, cultivated even before rice or millet.”

Taro is sometimes referred to as “taro root,” too, but while we’re getting technical, the part of the plant we eat that is grown underground (the leaves and leaf-stems are edible, too) is not the roots, but rather the corms and cormels. 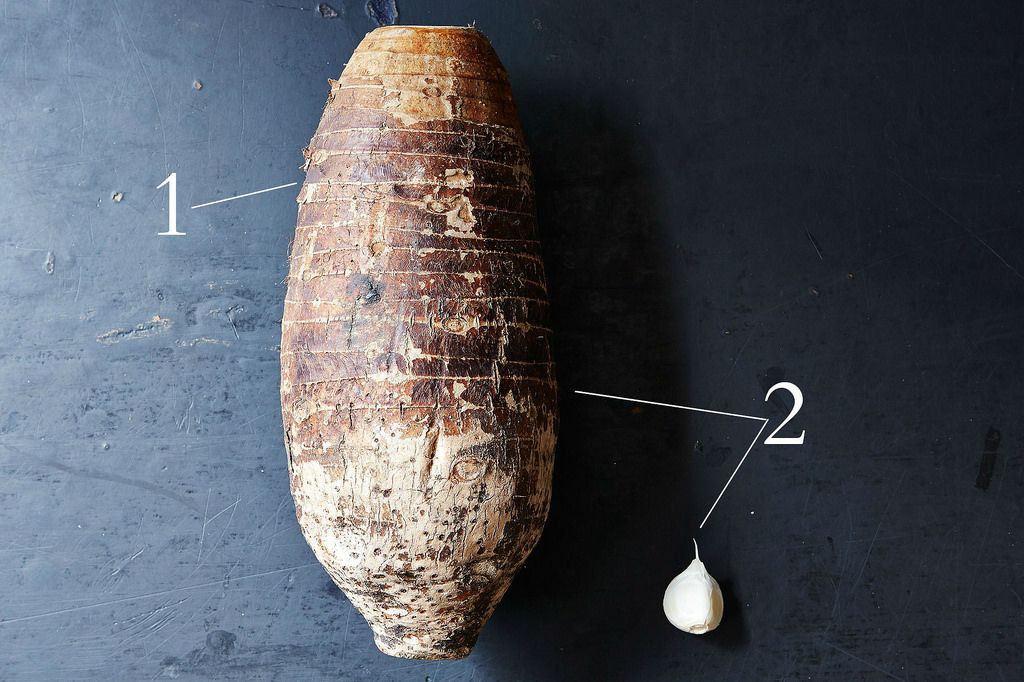 There are more than 100 varieties of true taro, but in the continental U.S., you’re most likely to only come across two of them:

Dasheen (C. esculenta var. esculenta) is the variety shown throughout this post. It’s large—shown here next to a clove of garlic (2, pictured above)—so large that you’ll sometimes find it sold cut in smaller sections. Once cooked, its flesh is drier and more crumbly than that of eddoe.

Eddoe (C. esculenta var. antiquorum) is smaller, ranging in size from that of a fingerling potato to that of a large lemon. They are a little blander and more moist (sorry) than the larger dasheen.

Both types have visible rings (1, above) running down the length of the corm, and although ours is fairly smooth, both dasheen and eddoe can have a shaggy exterior. Neither type is likely to be labeled by name, but you can easily distinguish between the two visually. Recipes will often specify which type you’re looking for, but if not (or if you can’t find one or the other), they are similar enough in taste that most of the time you can use them interchangeably. 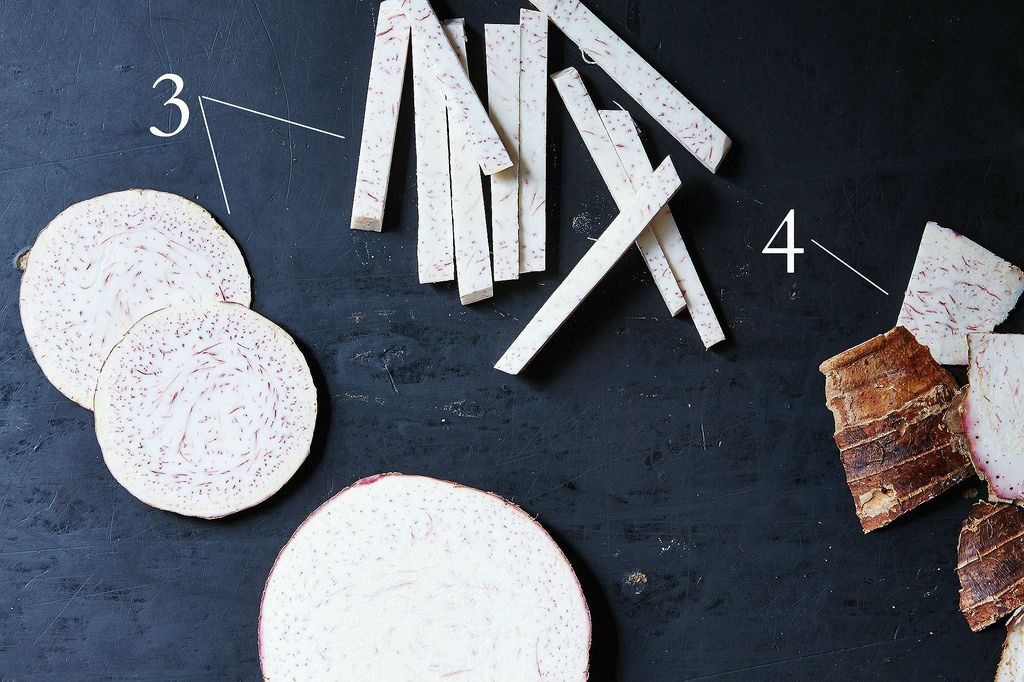 Where to Buy & How to Store

You can find taro at well-stocked grocery stores or Indian, East Asian, or Latin American markets. Choose firm specimens free from soft spots, mold, and cracks, and store them in a cool, dark spot for a few days. For most of us, a brown paper bag kept at room temperature will suffice, but a root cellar would be better if you have one. Like potatoes, sweet potatoes, winter squashes, and other root vegetables, taro has a long shelf life.

How to Prep & Notes of Caution

Just a little FYI: Taro, in its raw form, is poisonous. Once cooked, it’s totally safe to eat, but even touching taro can cause severe skin irritation so it’s important to handle this vegetable carefully. Whether you plan to make roasted taro, fried taro chips, or taro pancakes, read these steps fully before you begin:

Put on a pair of gloves, scrub taro root well, and then remove the skin (4, above) with a paring knife or a vegetable peeler. We highly recommend y-shaped vegetable peelers for any peeling needs, but especially for hearty root vegetables that tend to put up a fight. Gloves are called for due to the presence of oxalic acid crystals, which can irritate sensitive skin. If you don’t have disposable gloves, coat your hands with cooking oil before peeling—and remember not to touch your eyes! Once the corms are peeled, cut or slice them (3, above) as needed for your intended use, and either use them immediately or place them in a bowl of cold water to prevent discoloration. Smaller eddoe are often cooked with the skin on and then peeled, which eliminates the need for gloves.

Please be advised: If those oxalic acid compounds can irritate the skin on your hands, imagine what they can do to your throat: Don’t eat taro raw, it needs to be cooked first. (That goes for the leaves and leaf-stems too.)

More: For a raw treat that’s pleasant, not painful, try these Snack Balls with Apricots, Dates, and Cashews.

Taro flesh color can vary from creamy white or speckled (3, far above) to pale pink and purple. Whatever color you start with, though, know that depending on the preparation, you’ll likely end up with a less appetizing shade of grayish-purple sludge once it’s cooked.

How to Cook with Taro

Now that you’ve learned how to safely prepare taro, it’s time to cook it! When you think of taro, you’ll likely first think of poi—the dish is popular in Hawaii and the Philippines, but it’s very polarizing. In Vegetable Love, Barbara Kafka writes: “With the best will in the world, I cannot honestly give a recipe for poi, since I hate it.” Poi opinions aside, taro is just as versatile as a potato and perhaps even more so. But what does taro even taste like? Once cooked, its sweet, nutty flavor is welcome in a wide variety of dishes, both sugary and savory. You can think of taro as a sibling to potatoes or sweet potatoes. In these Taro Shrimp Fritters, the savvy folks behind Red Boat Fish Sauce swapped out the sweet potato for taro for a slightly different flavor. “The taro is also lower in moisture than sweet potato, so the fritters stay crisp longer,” they explain.

Here are a few ideas to get you started with taro:

Tell us: How do you like to eat taro? 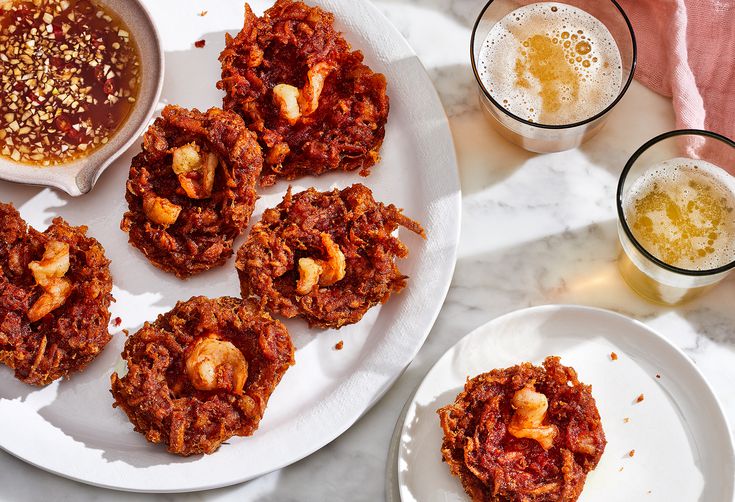