How Amanda Hesser Changed the Way We Cook

I was somewhat of a late bloomer in media. I didn’t know I wanted to work in magazines until my sophomore year of college, and even then, I was hesitant. The idea of being a food writer intrigued me, but I didn’t really understand what that meant or how to get there; I knew it wasn’t the same thing as being a restaurant critic, nor was it someone who developed recipes (at least not entirely).

It wasn’t until I read Amanda Hesser’s Cooking for Mr. Latte that I found a new type of food writing that appealed to me. It was warm and funny. Food was a thread in the book, but so was friendship and romance. It was also the first time I was reading recipes that sounded like they had been written by an actual person, not a robot. Amanda Hesser taught me that food and writing are at their best when they’re not perfect—when you acknowledge that mistakes are as much a part of cooking as they are life. You loosen your apron ties, maybe accidentally drop a pie crust on the floor, get messy over and over again, and have fun with it—that’s the best kind of relationship a home cook (or writer) can have with their craft.

There are hundreds of anecdotes like mine about the influence that Hesser has had on home cooks. “Amanda has a way of making notoriously fussy things, well, unfussy—like when she admits to taking the lazy route and not peeling the peaches for her beloved peach tart,” says Maurine Hainsworth, a copywriter for Food52. Hainsworth not only religiously follows Hesser’s guidance when baking her peach tart; she also follows her quick and easy method for poaching an egg, a technique that never seems quick or easy. That is, until Hesser demonstrated how to do it.

Earlier this year, Hesser’s The Essential New York Times Cookbook was revised and republished with more than 120 new recipes. Hesser was a food editor at The New York Times before launching Food52 with Merrill Stubbs in 2009. The cookbook was formative for so many home cooks. Just ask our community: “Amanda’s Essential NYT Cookbook…is so peppered with Post-it notes that I can never hope to cook all I’ve marked,” says Kayb.

“It’s clear Amanda appreciates the inspiration of other great cooks. I was just getting really into food around the time the first edition of The Essential New York Times Cookbook came out—I discovered Food52 shortly after and dived in deep! Her work opened my eyes to the wide, wide world of chefs, cookbook authors, and home cooks whose recipes and kitchen tips I may not have otherwise become familiar with,” says Food52’s Assigning Editor Rebecca Firkser.

Hesser’s approach to cooking may be unfussy, but her impact on cooking cannot be overstated. She has quite literally changed the way so many of us cook. “Amanda’s recipes—like her general approach to everyday cooking—speak to those of us who, like her, have limited time in the kitchen, yet want to eat well. Two recipes I’ve made so many times and for so long, it seems, that I cannot remember not making them are the pickled red onions from Amanda’s “low-maintenance taco” recipe and her peach tart. Both require simple ingredients and just a few simple steps—unfussy, yet altogether delicious,” says Helen Leah Conroy (aka AntoniaJames), a Food52 member since its earliest days.

Above all, Conroy says she has always felt that Hesser values home cooks’ time, as well as their intelligence in the kitchen. She never speaks down to her audience, but she also never assumes what ingredients and techniques they have access to.

“She has shown me (us, everyone) over and over that recipes and cooking don’t need to be overly fancy, fussy, or laden with a zillion fancy ingredients. Thoughtful selection of a few components is the key to most of her recipes and such a great lesson for any cook,” says Abbie Argersinger.

Hesser may be an influential figure in food media, but she’s still approachable. She does it all without an exaggerated emphasis on the sort of techniques you’d learn only in culinary school, or in the back of a Michelin-starred restaurant. Some of her most poignant lessons are the simplest ones: “Alternate dry and liquid ingredients when making cake batter. A good knife is worth paying for. Good ingredients are also worth it. Tapenade isn’t tapenade unless it has capers. Every meal should end with dessert,” says Food52 community member Barbara Reiss. That last point may be Hesser’s most important lesson. Take note.

And now Hesser’s lessons have reached the next generation, including Food52’s Food Editor Emma Laperruque, who, following in Hesser’s footsteps, just published her first cookbook, Big Little Recipes. “Amanda taught me a million things about food and publishing and food publishing, but the thing that stuck with me the most is her commitment to approachability. Like Baking Sheet Macaroni & Cheese that’s little more than macaroni and cheese. And Broccoli Rabe in Lemon Cream that’s little more than, well, you get it. All of these recipes are flavor-forward, technique-savvy, and to the point. They’re brashly simple. That totally changed the way I develop and edit recipes. And it also totally changed the way I make dinner,” says Laperruque.

Hesser continues to foster creativity and community as she leads Food52. On our cooking Hotline, you’ll find multiple discussions from our community members asking for guidance as they cook through The Essential New York Times Cookbook. User John was concerned that the caramel sauce for Amanda’s Chocolate Caramel Tart was too thin, and other home bakers were quick to come to his rescue, offering speedy solutions to his conundrum. I can’t peek inside Amanda’s head (I wish I could, because I’d be a far better writer), but I think this is exactly what she envisioned for Food52—a community-oriented space for home cooks and bakers to come together, sharing and workshopping recipes and passing along generations’ worth of cooking wisdom.

What did Amanda Hesser teach you about cooking? Tell us in the comments below! 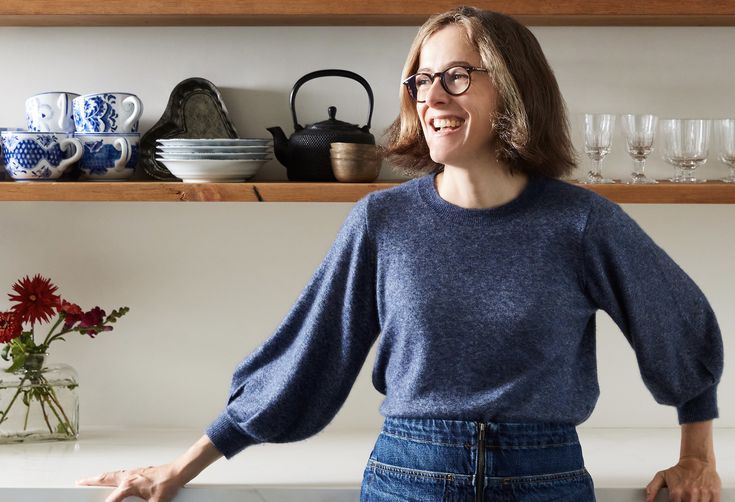