The Best Insulated Water Bottles To Keep Us From Melting

Welcome to Best of the Test, a thoroughly tested, expertly vetted, only semi-serious product recommendation series. Join us as we sleep with a dozen different bed sheets, make gallons of ice, air fry all the wings, and more in pursuit of the very best things to buy.

Insulated water bottles are a no-brainer—especially when temps are soaring. They keep drinks cold or hot (but please, not in this weather…), depending on your needs; they’re endlessly portable and reusable; and some are even super pretty (I mean, look at this speckled one. The downside to such an everyday essential? There are hundreds with similar names and similar claims.

In fact, before I started testing bottles for this guide, I had a handful of random ones that I’d used on and off but never committed to because they never really lived up to their claims. I’d just never gotten rid of them because, well, they’re still functioning water bottles—I’m gonna need ’em one way or another!

But now, after testing nine of the most popular and best-selling insulated water bottles for almost five months, I’m ready to clear out the junk for ones that actually live up to the hype.

How we tested the best insulated water bottles

I identified the most popular water bottles based on our readers’ favorite stores and brands, as well as spent hours conducting market research. This yielded way too many results, so I filtered things further. Bottles needed to be available at multiple stores for ease of shopping, at least double-walled for proper insulation, made with food-grade stainless steel for safety, have a wide enough mouth to fit rounded ice cubes, and fit a standard car cup holder. The bottles also needed to be available in multiple sizes; I tested ones that ranged between 20 and 24 ounces because they’re the most popular size and would usually fit a car cup holder.

Once I narrowed things down to nine bottles (whew!), I put them through a series of stress tests and just generally lived with them over several weeks, using each one instead of my everyday Duralex tumblers (which also helped me drink more water!). After I originally published this guide in May, I continued to test the top bottles for the next five months—and, well, here we are.

Cold water test: I filled each bottle with as much ice as it’d hold and then topped it off with room-temperature water. I temped the water with a Thermapen food thermometer to make sure it was at 35°F and then took the temp again after 24 hours, which is the maximum time most of the bottles claimed they’d keep water cool.

Hot water test: With the exception of theTakeya Actives Insulated Water Bottle With Straw Lid, since it’s not rated for hot water due to the straw, I filled each bottle with water that was hand-hot at 115°F, which I confirmed via Thermapen again. None of the brands mention how much heat they can withstand, and boiling water is never advised, but hand-hot drinks are usually fine.

Leak test: I placed a drop of blue food dye into each bottle and set them on their sides overnight to see if there’d be a little pool of colorful water the next morning.

Drop test: I literally dropped each bottle five times onto gravel and cement from about six feet up, noting any dents and chips on the bottles and lids.

Fit test: I put each bottle into two different cars’ cup holders and went for a joyride around my neighborhood. One is about 3 inches in diameter and the other slightly larger, at around 3.2 inches. I also placed the bottles into my everyday Cuyana tote bag that has an elastic pocket for bottles as I ran errands.

Of the nine bottles that I tested for this guide, six didn’t make the cut—or rather, they didn’t survive the gravel. For the TL;DR of the top bottles’ specs, check out the handy chart below. For all the results, keep on reading.

If you like ice-cold water, the CamelBak Chute Mag is basically like a portable freezer. After 24 hours, it had about 60 percent of the ice left (the most out of all the bottles tested), and the water temperature was a super-cold 33°F—just above freezing. In the past five months, I’ve brought this bottle to the beach and on blistering hikes several times, and each time, I felt the sweet, sweet relief of ice-cold water. While not the most fun test to run during a summer heat wave, the double-walled vacuum insulation helped keep the hot water hot during testing, dropping down 15 degrees to a warm-enough temperature that didn’t burn my mouth.

While most other bottles I tested only had one screw-on lid for drinking and refilling, the Chute Mag’s lid has an additional cap so your mouth isn’t exposed to, say, gravel or cement on a driveway or old mail underneath the passenger’s side of the car. The handy magnet prevents dropping or losing the cap itself and makes it easier to drink with one hand, too. Even though the lid and mouth meant that there were two points that could possibly leak, not a single blue drop of water made its way out overnight.

And speaking of dropping things, the plastic lid and handle were pretty roughed up after their introduction to my driveway, but not nearly as badly as some of the others—and the body showed minimal dents and scratches.

For hot drinks, the S’well Original is about the closest you’ll get to a traditional tumbler for coffee, tea, cocoa, and the like. As a personal preference, I usually use an insulated tumbler because it has a smaller opening for easy sipping—a must if you’re driving. But the construction is the same with double-walled insulation, so I see no reason why you couldn’t use the same bottle for hot drinks; all of the bottles I tested work fine with hand-hot temps.

The S’well Original had the longest heat claim—up to 18 hours—and in my hot water tests, it kept water the hottest, dropping down to just 106°F. The smaller opening meant that I was less scared to scald my mouth while sipping, too.

There were no leaks to speak of, but the smooth stainless-steel cap makes it hard to screw on securely if your hands are wet. The construction came in handy during the drop test, though—the little divots on the cap and bottom of the bottle masked most of the dents. Unfortunately, it didn’t help hide a rather large dent on the side. Small chips were masked by the speckled pattern on the bottle that I tested, though single-color bottles might not fare so well.

The slimmest bottle in the testing pool, the S’well Original fit nicely into the elastic compartment in my tote as I ran errands, but it was almost comically small in my car. The 17-ounce bottle I tested had a 2.8-inch diameter, so it moved around a lot when I drove; try the larger 25-ounce bottle if you’re a frequent driver.

It should come as no surprise that the bottle with “Actives” in the name would wind up being the best for running, hiking, and beach days. Well, it’s not exactly ergonomic to carry a 24-ounce bottle filled with ice if you’re trail running, but the little design details were perfect for the treadmill and beyond.

The silicone sleeve on the bottom of the bottle kept it from bouncing around on the treadmill, absorbed the shock of my driveway so the bottle looked almost new save for a roughed-up cap, and made for a secure fit in my car’s cup holder when I came to less-than-smooth stops—intentionally, of course. Meanwhile, the flip-top straw lid meant easy one-handed drinking while working out or driving, and the rotating carrying loop was easier to hold on hikes as opposed to a more rigid cap.

When the straw isn’t lifted up for drinking, the bottle is as leakproof as the others I’d tested even as it jostled around my tote—I put this bottle through an extra test and let it roll around the dark depths of my bag in addition to using the elastic pocket. But when the straw is up for action, expect water to dribble out. The straw is also not rated for hot drinks, though the double-walled insulation meant cold water stayed chill at 40°F after 24 hours despite all the ice melting. Not the coldest temperature out of all the bottles, but it was still a welcome respite after sweaty runs and hikes.

At 24 ounces, the Contigo Cortland Chill 2.0 was the largest bottle I tested (along with the Takeya), as well as the best value for your hard-earned dough. I’ve never seen the bottle cost more than $25 on Amazon or Walmart, but since prices can fluctuate, I’d recommend tracking prices to make sure you’re getting a good deal. Alternatively, you can wait until major holidays to save—a two-pack of the bottles went for about $30 during Amazon Prime Day earlier this year.

The Contigo was second to the CamelBak during the cold water test—with about 30 percent ice left and measuring 33°F after 24 hours—and second to the S’well for hot water, measuring 103°F. This was slightly too hot to drink comfortably, though if you like ’em hot, that’s not a bad thing.

The stainless-steel exterior didn’t show many dents or scratches, though it showed all my fingerprints during testing. The plastic cap and handle were more roughed up, and the impact on gravel and cement caused the lid covering the mouth to pop open, so be sure to wipe it off before your next drink. This hasn’t worsened over the last few months of regular use either.

The Yeti Rambler was the most popular insulated water bottle among our IG community for keeping drinks cold, and especially for its Chug Cap because you’re not putting your mouth on something you just dropped. In my testing, it was also one of the more comfortable bottles to drink from, unlike bottles that have extra-wide openings that spill water all over you (not that it happened, of course…).

Unfortunately, Yeti doesn’t make any claims as to how long its bottle keeps temps cold or hot, so there’s not much in terms of comparison. But if we were to compare it to the others I tested, the cold water was 40°F and the hot was 96°F after 24 hours. Both temps are still objectively cold and hot, which should be fine for most folks.

The Rambler didn’t leak in my testing and showed minimal chipping on the bottle, but the plastic handle was pretty damaged. Thankfully, you can grab a replacement Chug Cap for aesthetics, though that would add to your overall cost for the bottle.

While most other bottles recommend washing by hand, this is one that can be tossed into the dishwasher—another win for something you’re likely to use every day and wash once a week. It can’t easily be tossed into the car though—even the 18-ounce bottle I tested wouldn’t fit into my car’s cup holder.

This post was updated in August 2022 with more details and notes after continuing to test the bottles for five months.
What’s your favorite insulated water bottle? Let us know below! And if you’re looking for the best bed sheets, garden hoses, and more, check out other Best of the Test guides.

This post contains products independently chosen (and loved) by our editors and writers. Food52 earns an affiliate commission on qualifying purchases of the products we link to. 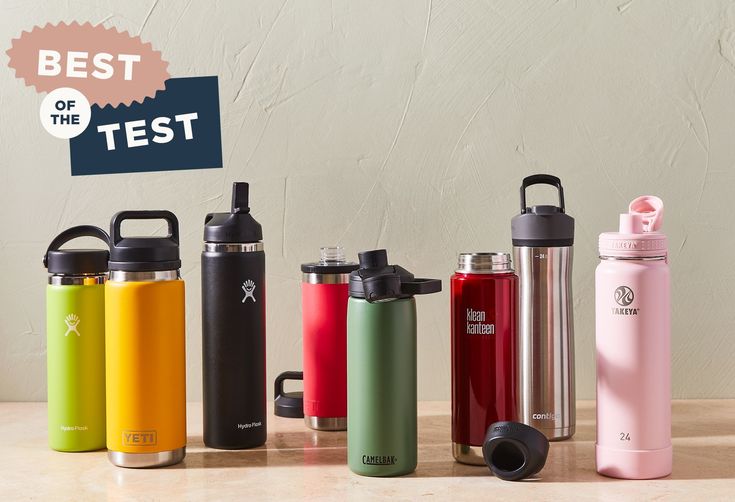