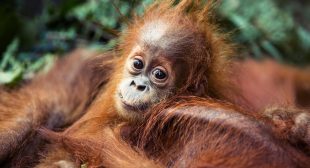 The world is full of remarkable people whose amazing work often goes unnoticed or doesn’t get the attention it deserves. One of these people is Charlie Dailey, who is a brilliant and accomplished professional photographer. But her commercial success serves a much greater purpose. Charlie has made it her life’s mission to highlight the amazing beauty and biodiversity of our planet and to draw attention to the ways in which humanity is destroying the precious ecosystems all life depends on. Not too long ago, Charlie spent a few weeks in Indonesia, which sadly has become a frontline in the battle to protect biodiversity and tackle the root causes of climate change. Here is part of a letter she sent to me afterwards, accompanied by some of her incredibly touching and beautiful photography:

Orangutans look you in the eye, they meet your gaze with that of an equal…Destroying them will rank as one of the great barbarous acts of mankind.’ Gerald Durrell

Sunrise over the Leuser Ecosystem in Northern Sumatra is a breathtaking sight. Skies turn a bruised pink and the canopy is still blanketed in mists. The dawn chorus is a cacophony of exotic birds, quivering insects and rambunctious monkey cries punctuated, if you’re lucky, with haunting orangutan and elephant song.

The Leuser Ecosystem is an UNESCO World Heritage Site and one of the largest, single continuous areas of tropical rainforest left in the whole of Southeast Asia. It is also the last place on earth where elephants, orangutans, rhinos and tigers roam in the same forest. But despite Leuser’s status as a World Heritage Site and being protected by Presidential Decree, it is under continued threat from illegal deforestation by palm oil plantations. This not only impacts the fragile ecosystem and the critically endangered iconic species that call Leuser home. It also exacerbates climate change on a global scale.

The name orangutan is derived from the Malay and Indonesian words ‘orang’ meaning ‘person’ and ‘Hutan’ meaning ‘forest’; ‘person of the forest.’ Indonesia is being deforested faster than any place on earth and, due to the habitat loss, the Sumatran orangutan (pongo abelii) and the newly discovered third species of orangutan (pongo tapanuliensis) have been placed on the International Union for Conservation of Nature’s (IUCN) critically endangered list – the last tier before extinction. Just a few months ago, I was invited to visit Leuser and photograph the capture and relocation of orangutans in immediate danger. I met with Dr Ian Singleton who has been working with orangutans in Sumatra for over 20 years. When his PhD research took him to Sumatra in 1996, he never returned. He is now the Director of the Sumatran Orangutan Conservation Programme (SOCP) whose amazing work covers all aspects of orangutan conservation; this includes rescue and rehabilitation of illegally held pets; many of which have been beaten, abused and kept in cages their whole lives.

Once rehabilitated, these orangutans are then released into the wild and SOCP are creating two new viable satellite breeding populations in the hope of safeguarding the species. To date, over 350 have been released into the new sites. I was able to accompany one of SOCP’s field teams, who had been alerted to the presence of a mother and baby orangutan located in one of the most heavily deforested regions of Leuser. The mother and baby had been hemmed into a tiny part of surviving forest, surrounded by illegal palm oil plantations. After locating the animals and safely darting them from the canopy, the SOCP team were able to translocate them to safety some ten hours north to a release site. As we watched the rescued pair disappear into the canopy, Dr Singleton warned that if the Leuser ecosystem cannot be protected from the palm oil companies and further industrialisation, the Sumatran orangutan will become extinct in the wild. 85 per cent of Sumatran’s orangutans live near the borders of Leuser, with the highest density living in the low land peat swamp regions of Tripa, Kleut and Singkil. These are areas of primary tropical forest with canopies up to 40 foot that are home to a dazzling array of birds, amphibians, mammals, reptiles and plant species.

These peatlands are not only an important source of Earth’s oxygen but are also significant carbon sinks, sequestering carbon (CO2) and acting as one of the best defences we have against the devastation of climate change. Peatlands globally sequester an estimated 500 billion metric tonnes of carbon out of the atmosphere, and while they only cover three per cent of the Earth’s land surface they are responsible for 32-46 per cent of the total soil carbon pool, exceeding the amount stored in all the forests of the world. When a palm oil company moves into an area, they chop down all valuable trees, then burn and bulldoze the land, incinerating all life, leaving behind post-apocalyptic scenes of devastation. Peatlands are water logged by nature, and that is why they are such powerful carbon sinks. But to plant on the lands, the palm oil companies cut canals to drain the water. As the swamps are drained and burned they release their sequestered carbon, turning carbon sinks into carbon bombs. Peatland fires consume the surface vegetation but also smoulder beneath the ground consuming the peat itself as a source of fuel. These fires are very hard to control and once ignited, may burn for weeks or even months, like the massive 2015 fires in Indonesia that burned down more than 10,000 square miles of rainforest. The World Bank estimated that the fires cost Indonesia more than $16 billion, double the value of 2014’s gross palm oil exports of $8 billion. The Illegal palm oil plantations and the fires they cause don’t just wreak economic havoc, they also bring iconic species such as the orangutan and the tiger to the brink of extinction.

Palm oil companies annex rainforest because it is considered free land and there is no political will to regulate them. A few local NGO’s including FKL and HAKA are achieving success in bringing about the prosecution of illegal plantations and getting concessions revoked but the courts move slowly. Palm oil is used in approximately 50 per cent of all supermarket shelf products, from food and snack manufacturing to cosmetics and pharmaceutical products. If all major companies with palm oil in their production chain, committed to using only RSPO-certified, sustainable palm oil, the rainforests of Leuser would not be at risk. As consumers we have never had more power through our spending choices and through social media to demand an end to the use of conflict palm oil in the products we buy. It is time to act. We cannot allow Gerald Durrell’s words to become a reality.

All of us can do our part to help protect the amazing Leuser ecosystem from further destruction. Head over to Love the Leuser alliance to see what you can do to make a difference.

When it comes to palm oil and the impacts of its cultivation, consumers have enormous power to ensure that illegal and unsustainable practices end. I was encouraged to read about Unilever’s recent decision to release information about its entire global palm oil supply chain. We need more transparency like that from manufacturers and retailers alike. For starters, learn more about the Roundtable on Sustainable Palm Oil.